September 11, 2012 marked the start of a new chapter in Catalonia’s pro-independence history. That year, with then-president Artur Mas, around 1.5 million people took to the streets to claim that the territory became "Europe’s newest state." Since then, ten years have passed with political but also social changes.

Each year, a massive pro-independence demonstration has been held coinciding with Catalonia’s National Day, or Diada. These rallies captured international attention and shaped domestic politics.

This year, the protest organized by the Catalan National Assembly (ANC), faces more challenges at home than abroad.

A few days before the closure of the Catalan parliament for the summer holidays, members of the senior coalition government party, Esquerra Republicana de Catalunya (ERC), in the parliament bureau voted in favor of suspending the chamber speaker, Laura Borràs, over corruption charges.

Borràs, currently president of the junior coalition government member, Junts per Catalunya (JxCat), has denied all allegations and called those who voted to suspend her "hypocritical judges," she said back in July after the chamber’s bureau vote.

Another controversy arose when the Catalan president, Pere Aragonès, announced he would not attend the rally organized by ANC during the ‘Diada’. The reason is "because it is against [pro-independence] parties and not against Spain," sources confirmed to the Catalan News Agency (ACN).

In fact, the grassroots organization ANC has been skeptical at the approach Aragonès is leading on the independence issue, prioritizing talks with Spain in order to agree on a self-determination referendum with Madrid.

A similar position to the one taken by Junts per Catalunya who believe there is no real negotiation about the underlying issue taking place, to the extent that they do not even take part in the discussions.

A few weeks after the Diada, Junts will ask their members if exiting the coalition is the way forward and on October 1, exactly five years after the independence referendum, will propose a fresh roadmap towards a split from Spain.

On the other hand, Aragonès is expected to announce a plan to achieve self-determination in late September – both paths are expected to be completely different, as both parties have almost totally different approaches toward attempting to achieve their stated aims of independence.

The demonstration will be the first one, in years, not attended by the current Catalan president as, since 2016, the leader has joined the rally. First, Carles Puigdemont in 2016 and 2017, then his successor Quim Torra in 2018, 2019, and 2020; and last year, despite not attending this year’s Diada protest, Aragonès did join the march.

The demonstration will start at Barcelona's Parallel avenue and rally-goers will march towards the sea and all the way to Estació de França's train station by Ciutadella Park, which hosts the Catalan parliament. The event will start at 5.14pm but organizers recommend attendees to be in Parallel avenue at 4.30pm.

The first September 11 demonstration was called by the pro-independence Catalan National Assembly in 2012. Their motto and objective was simple: “Catalonia, new European state:”

There is some debate over how many people actually turned up in what would become a trend at future demonstrations. Organizers claimed they managed to assemble 2 million people in Barcelona, while the Spanish government delegation in Catalonia rebuked this, stating that there were only 600,000. Meanwhile, the Catalan government and local police found a middle ground with an estimate of 1.5 million people, perhaps a more reliable figure. 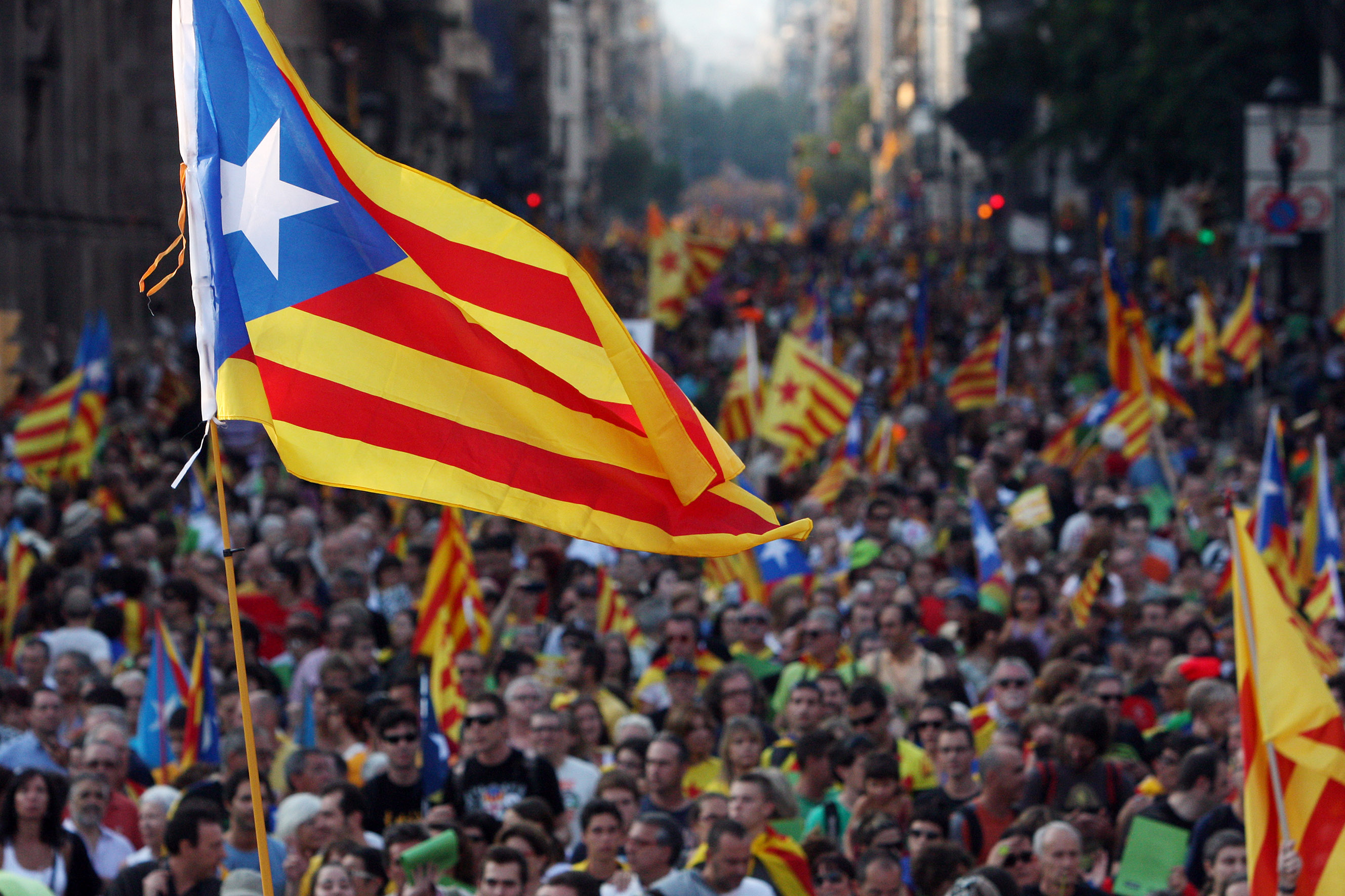 The Catalan president at the time and leader of the now-defunct CiU party, Artur Mas, traveled to Madrid after the protests to demand a better financial deal for Catalonia from his Spanish counterpart, Mariano Rajoy. Rajoy rejected the request and Mas started advocating for Catalonia’s right to self-determination. This marked the beginning of nine years (and who knows how much longer) of talk of independence in Catalonia.

The Catalan National Assembly and Òmnium Cultural organized a rally inspired by the events of 1989 in which people joined hands across Estonia, Latvia, and Lithuania to protest against the USSR.

Catalans stood similarly together, arm in arm, crossing Catalonia from north to south, with the Camp Nou even opening its doors so that the chain could pass through it. An estimated 1.6 million participated.

Two months before the non-binding November 9 vote on independence, protesters made it pretty clear how they would be voting.

Protesters wore yellow and red t-shirts and formed a giant V with the colors of the Catalan flag through two of Barcelona’s major streets, Gran Via and Diagonal.

An estimated 1.8 million people participated that year in a figure that has not been surpassed since. The culmination of the protests was at 5:14 pm when out of the 1.8 million people present, one girl cast a vote in a ballot box placed at the point of the V. The time chosen represented the year 1714, when Catalonia was defeated by Spain in the Succession War and lost political independence.

2015: Values of the future Catalan Republic

In 2015, pro-independence supporters laid out plans for the future of Catalonia. Protesters, this year estimated at 1.4 million, carried pointed banners.

People were divided into ten differently colored sections, each representing a different value of the future Catalan republic including social justice, solidarity, culture, democracy, and sustainability.

Protesters this year spread across five different cities across Catalonia: Berga, Barcelona, Lleida, Salt, and Tarragona. Once again the divide represented different dimensions of Catalonia as an independent state. However, this year the number of protesters more than halved to 800,000.

Less than three weeks before the October 1 referendum on independence, the September 11, 2017 protests were known as the ‘Diada del Sí’ (‘National Day of Yes’), given what protesters hoped the outcome of the referendum would be.

Protesters were brought on buses from all around the country wearing yellow shirts for independence and held a minute of silence in memory of the victims of the Barcelona and Cambrils terrorist attacks in August of that same year.

This year protesters created a giant ‘plus’ sign in a demonstration at the intersection of major roads. Large pro-independence banners were also passed along over the crowds. Crowds for this year were estimated to be at around 1 million.

2018: A fight to free political leaders

Protesters gathered to demand the release of jailed political leaders who were charged for calling a referendum and trying to split from Spain in 2017.

The number of protesters was comparable to the previous year, estimated at around 1 million.

Much like in 2014, at 5.14 pm an act of symbolism was carried out, once again representing the fall of Catalonia in 1714. Total silence fell, followed by a wave of sound from one end of Diagonal to the other where a wall was toppled, representing the direct rule imposed by Madrid following the independence referendum.

2019: Lowest turnout ahead of long-awaited verdict

With 600,000 attendees, according to Barcelona’s local police, 2019’s rally saw the lowest turnout for a National Day demonstration since the independence movement went mainstream in 2012. Still, protesters managed to flood Barcelona’s Plaça Espanya and Gran Via avenue.

A month later, the sentencing of 9 independence leaders convicted of sedition for organizing the 2017 independence push unleashed a wave of protests that looked nothing like the National Day rallies, with hundreds injured following a week of altercations in Barcelona and other cities.

The Catalan National Assembly opted for a highly de-centralized Diada with over 130 events all across Catalonia, as well as abroad, in an effort to prevent the spread of Covid-19.

All events combined gathered around 59,500 people, ranging from the 1,700 that attended an event in Badalona to the 12 people that gathered in Taüll, a small town in the Pyrenees.

Under the motto "The duty to build a better future, the right to be independent," these de-centralized protests were complemented by online activities striving to create "a great virtual network" as well as Covid-19 fundraisers.

Starting in the center of Barcelona, at Plaça Urquinaona square, thousands of demonstrators marched up to the Catalan parliament building in Ciutadella Park.

The start remembered every one of the violent clashes between police and rioters following the sentencing of pro-independence leaders in 2019. That year, ANC decided to unite all forces in a joint rally in the Catalan capital without social distancing.