The Palau de la Música Catalana is a unique modernist gem right in the heart of Barcelona’s old town.

Its grandiose is immediately evident when you stumble upon it in the narrow streets of the neighborhood of Born, with its enormous pillars at the front doors decorated with colorful mosaics, the sculptures of flowers, shields, and emblems along its walls, and the intricate designs on the higher floors of the building that are difficult to see from the street, given the proximity of other buildings that surround it. Despite the trickiness in taking in the full view of the exterior facade, the promise of further beauty to explore inside is clear.

Designed by Lluís Domènech i Montaner, the Palau de la Música Catalana is one of nine UNESCO World Heritage Sites in Barcelona. The sites with this status in the Catalan capital include seven of the works of Antoni Gaudí, and two from his art nouveau contemporary Domènech i Montaner – the Palau, as well as the modernist enclosure of the old Hospital de Sant Pau. The Palau was given UNESCO status in 1997.

Listen to our Filling the Sink podcast episode to learn which are the other UNESCO World Heritage sites in Catalonia.

Works started on the majestic building in 1905 and took only three years to complete, and the concert hall opened in 1908. Advances in technology thanks to the industrial revolution allowed for construction to move fast. Much of the structure was built using steel, which was then covered with other materials such as bricks, marble, and glass.

The most important room in the building is, of course, the main concert hall. This room was built with a steel frame covered in stained glass, which allows for a lot of natural light to enter the auditorium, sometimes even tinted in the colors of the beautifully designed windows.

Upon entering the concert hall during the day, the burst of light and color that fill the space is one of the first things you’ll notice. Mercè Mill, who is in charge of managing the tour guides at the Palau de la Música, told Catalan News that during evening performances, “it's nice when we have concerts going on, it gets dark” gradually during the concert.

The stained glass ceiling is another mosaic of wonder that mesmerizes visitors from above. With an inverted dome skylight at its center, the structure both helps the acoustics of the room and provides even more light. “The light goes through very nicely and it represents the sun shining, and we have a choir of women around the sun,” Mill explains. 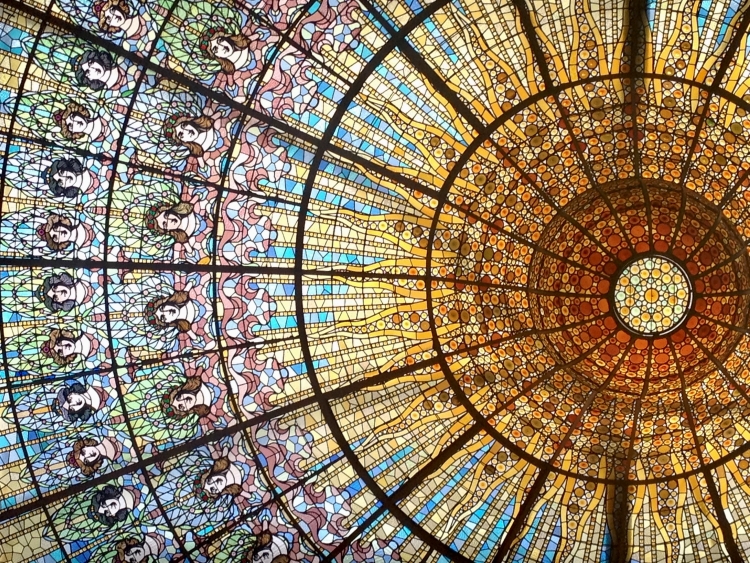 Everywhere you look in this room, there are more surprises to see. The walls themselves are like an art gallery in its modernist style that is typically very busy and filled with detail and artistic flourishes. The design and decorations are “a constant homage to nature,” Mill explains. The walls and ceiling are covered in either beautiful stained glass or else small sculptures, be they of flowers, emblems of Catalonia such as a coat of arms, or even animals like horses.

The stage is rather small, not large enough to accommodate a full orchestra, but enough to fit more than a dozen musicians with ease. On the curved wall at the back of the performance area, 19 “muses” of the Palau can be found – angelic figures sculped into the wall, as though they were bursting from the structure itself, each playing a different instrument. The wall is also adorned with glazed ceramic mosaics, and above stands a huge organ that is used for concerts. The organ was the only piece of the entire building that did not come from Catalonia – all of the materials to build the Palau came from different parts of the territory, but there were no organ makers in Catalonia in the early 20th century, meaning one was sought from Germany.

Seats are divided into three tiers, without any sort of private booth or preferential treatment afforded to any audience member or guest, alluding to the egalitarian nature of the Palau de la Música. The main concert hall only has the capacity to seat a little more than 2,000 guests, giving a very intimate feeling to the auditorium. No matter where your seat is, you’ll still be relatively close to the performers and will be able to enjoy the fantastic sound clearly.

The reason that the capacity is only around 2,000 is rooted in the origins of the building and of the choral society that own it – the highly prestigious Orfeó Català, a group that has since become one of the most important cultural institutions in Catalonia.

The Orfeó Català was, in the early 20th century, a group of youths who enjoyed getting together and playing music in bars, cafés, or wherever they could. Eventually, they grew tired of renting spaces to rehearse and perform, so decided to pool their resources together with the aim of financing their new home.

The musicians themselves, as well as some supporters who enjoyed the concerts and some wealthy families who were asked for donations, put their money together to buy a small plot of land in the city center that would become their new musical space. In all, there were around 2,000 members of the choral society at the time, so the capacity was fixed to include all of those paying members.

Lluís Domènech i Montaner was hired to design the building, and it took only three years for this architectural marvel to be constructed. The group wanted to start playing concerts as soon as possible so that they could start earning money and pay the builders and the architect for their work.

The building also contains two smaller rooms for recitals, concerts, or even business meetings or other such events. Today, the venue is a host of music with a scope much broader than orchestras, symphonies, or classical music. Mercè Mill points out that all music is welcome at the Palau, and flamenco, jazz, or even pop and rock concerts are held there regularly.